“Hotel Papa Mike you have two Mirage fighters 1000 ft above you and two helicopters 1000 ft below”, said the military Air Traffic Controller.

END_OF_DOCUMENT_TOKEN_TO_BE_REPLACED

At 5:30 of the morning of our departure, we were still dubious whether we’d be able to leave.

Nabil was stuck in London, his flight having been cancelled the night before, and I was waiting for confirmation that his rerouted flight via Basel took off. When he called to let me know that they also cancelled that flight, I decided to throw in the towel. I mean, there are times when Fate sends you signs and woe betide those who ignore them, as the ancient Greeks had discovered. I resigned myself to it being “maktoub” that we would not fly this weekend.

END_OF_DOCUMENT_TOKEN_TO_BE_REPLACED

It was the longest final approach I had ever done. We had just flown over the French-Spanish border, some 40 miles out from our destination, when Girona Tower cleared us for a direct approach — unheard of from a busy airport so far away. We thanked the controller for his kindness and flew for about 15 minutes with nary a word from another aircraft on the radio. It was a surreal experience: we had the airport for ourselves.

END_OF_DOCUMENT_TOKEN_TO_BE_REPLACED

It took them 45 seconds and 3 hours to take off my one stitch.

I was in the A&E of Orbetello hospital to remove a stitch on my left eyelid, done back in Geneva. We were on holiday in Tuscany and I had to have the stitch removed before heading back home. We were advised by local friends that the best course of action was to visit the A&E, known here as “Pronto Soccorso” and this was where the adventure began.

END_OF_DOCUMENT_TOKEN_TO_BE_REPLACED 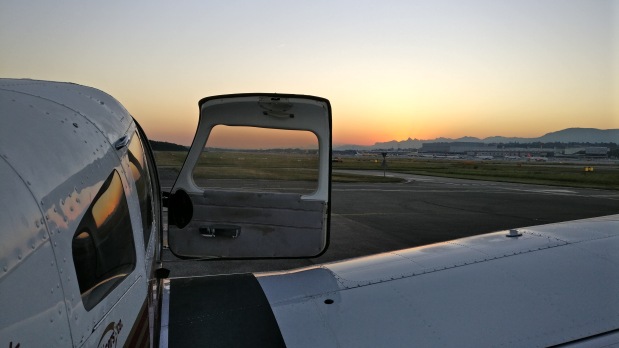 There’s something almost mystical about those early hours of the morning, between day and night, when the sun gently rises above the horizon, its warm glow casting long shadows as it slowly shakes the day from its slumber.